10 HBO Shows That Were Canceled Too Soon 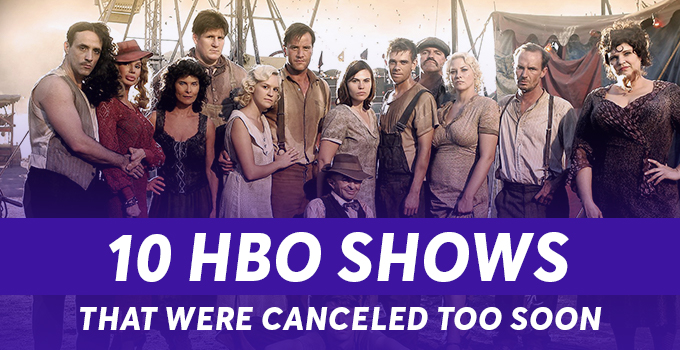 HBO is, without a doubt, a connoisseur of making groundbreaking television. Furthermore, it has a reputation for producing and broadcasting such cinematic art. Moreover, the audience calls the platform a risk-taker for taking challenging and potentially controversial content. In addition, the channel always strikes for "quality over quantity" when selecting new programming. Presently, HBO is one of the leading contributors to great entertainment via media.

However, such standards can become dubious and can make one think highly of itself. Which somewhere did happen with HBO as some potential HBO shows were canceled. Furthermore, the audience's expectation is also partially responsible for the same. Also, few of these cancellations were justifiable and deserving in the eyes of the spectators. On the other hand, some left the audiences a little sad as they were their favorite shows. Well, contrary to that, the network decided to pick up and renew certain shows to please the fans.

At present, some of the following shows are still available on the online platform of HBO that is HBO Max. Therefore, now it’s your only chance to stream them. Furthermore, you can enjoy these dramedies coupled with several genres with your friends and family via HBO Max Watch Party Extension. HBO Max Watch Party is the ultimate destination to get entertained and be together with your loved ones.

​Lovecraft Country, executive produced by Jordan Peele, portrays that enhanced horror could be just as effective on television. The vast combination of supernatural horrors, science-fiction, and social commentary revolves around a young African-cross-country American's trip to find his father. Furthermore, the tale is inspired by both the fictitious stories and troubling beliefs of cult author H.P. Lovecraft. Moreover, the protagonist has to fight along the way, both metaphorical (white supremacists) and literal (translucent blobs known as Shoggoths). Also, this is on the HBO shows that we canceled in the production stages of season 2.

​Looking was among those HBO shows that were canceled and lasted only two seasons. However, this is a more nuanced and diverse depiction of LGBTQ than any typical trashy American series on the queer. Furthermore, the director Andrew Haigh, brings the same low-key but highly engaging vibes as his sublime LGTBQ romance Weekend. In addition, the sense of personal and regular problems makes it more three-dimensional than the usual stereotypes. However, it's a shame that HBO's only queer-centered show didn't get the same longevity as its hetero counterparts.

3. How to Make it in America

The story follows the fortunes of two entrepreneurs trying to achieve the American Dream via the world of hipster fashion. It lasted for two seasons, from its colorful cinematography of the New York streets to its soulful on-the-nose theme tunes (Aloe Blacc's I Need A Dollar). The bright cast includes Kid Cudi, Eddie Kaye Thomas, and Lake Bell, making everything about How to Make It In America cool. Also, this show has a sense of menace that ensures the two jeans-obsessed heroes have more to worry about than sourcing premium denim.

Julia Davis' 2018 car-crash creation didn't last as long as it must have. Sally4Ever is unquestionably an acquired taste: the love triangle between Davis' monster, Catherine Shepherd's wallflower, and Alex Macqueen's sad-sack is the stuff of nightmares. Furthermore, it includes a defecation sequence that would make anyone grimace. Moreover, it is one of those HBO shows that were canceled, although it was a cringe comedy for one watch.

Out of all the HBO shows that were canceled, this had one of the craziest demise. Furthermore, there is no proof on the web that it actually existed. The story is a noir-ish narrative of two Pittsburgh businessmen working at a storage agency. A post-modern spin on postwar black and white comedy perplexed audiences in 1996, leading to a curtailed eight-episode season. Moreover, many audiences that have watched the show can say that it was just ahead of its time.

Some shows have the "it factor" to deliver pure entertainment, although they do fail till the climax turns up. Similarly, Carnivàle is one of those HBO shows that were canceled after its low rating in the latest season. However, the show caused a stir in 2003 when it premiered on HBO. It's a slow-burning surrealist drama set during the Great Depression, and its Heaven versus Hell story was inspired by Christianity rather than comics. Also, suppose you persist with its macabre traveling freak show universe. In that case, you'll be rewarded with a gorgeous David Lynch-esque fable that still has the potential to stun over 20 years later visually.

​Mike White's satirical take on corporate America in this superbly subtle blend of business humor and mental health drama is something for everyone to watch. The plot is of Amy Jellicoe, a former CEO reduced to the most dreaded office job imaginable after suffering a nervous breakdown. Amy Jellicoe is played by Laura Dern, who is nothing short of incredible charm and laudable performance.

Vice Principals could easily have lasted a few more seasons; unfortunately, it is one of those HBO shows that were canceled. Both Danny McBride and Walton Goggins play vice principals at the fictional North Jackson High School. Furthermore, both believe they're a perfect fit for the job when the principal steps down. When he doesn't endorse either of them and a new principal is hired, the two band together to try to bring down the new principal, whom they believe has taken what is rightfully theirs. On top of that, this show is brilliantly amusing, coupled with satire and hysteria.​

One of the rare things that deliver the comedy as well as the drama is the mumblecore favorites, Jay and Mark Duplass. Furthermore, the title refers to the latter's sound editor and his equally disgruntled wife (played by Melanie Lynskey) and the quirky singletons (Amanda Peet and Steve Zissis) they invite to live with them. Also, in the era of prestige television, the middle-class mid-life crisis is a perfectly opposite tale. Moreover, if you start watching it, you will crave more of it.

It won't be wrong to call HBO a hub for periodic dramas. However, in the case of Rome, even though it was co-produced by BBC, the budget was simply out of control for recreating Ancient Rome. Thus, the show was canceled in the production stages after two seasons. However, the creator was able to incorporate many of their planned future storylines into their final episodes. The story limns the missing link between the brutality of Gladiator and the political machinations and rise and fall of the Roman Empire.